This story, part of an open: Housing series exploring rising barriers to homeownership in Portland, looks at historic and current forces affecting the city’s African-American residents, and what they likely mean for the future.

PORTLAND, Ore. — As a teenager living under Jim Crow laws in the 1940s, Paul Knauls Sr. rode a bus 37 miles round-trip from his small Arkansas town to reach a school that served African-Americans.

After graduating high school in 1949, he was part of the group of black servicemen who integrated Fairchild Air Force Base in Spokane, Washington. As a budding Portland entrepreneur in the 1960s, he risked his savings to buy a nightclub in the section of North/Northeast formerly known as Albina, the part of town where white realtors and property owners pushed blacks to live and own businesses.

Knauls struggled against racism throughout his life. And, in some senses, he won.

He became a successful business and property owner, prospering financially and creating beloved places for Portland’s black community. He clung to his stake in North/Northeast, as the once-disinvested area was transformed, to the disadvantage of many residents, by urban renewal, then gentrification.

Knauls, 86, still lives on Northeast Bryant Street in the house that his second wife, Geneva, bought in 1965 for $28,000. It’s now worth more than $400,000. He still greets customers at the hair salon he named for Geneva on Northeast Martin Luther King Jr. Boulevard. His son, Paul Knauls Jr., 64, manages the operation.

Many of his black neighbors, and most of the black-owned businesses that used to crowd commercial streets such as North Williams Avenue and Alberta Street, are gone. They’ve been replaced by a new landscape of gleaming condos, yoga studios and cafes owned and occupied, almost entirely, by white people.

Even Knauls’ son has been priced out of the neighborhood. He rents an apartment in Vancouver, Washington, for $900, about half what he’d pay for a similar place in inner North/Northeast Portland. Recently, on his highway commute to Geneva’s, he missed his usual off-ramp and found himself on an unrecognizable street as he made his way north to the salon.

“After what I saw, I never want to go to Williams Avenue again,” Knauls Jr. says. “I used to know every business owner on that street. They’d say, ‘How ya doing, Paul,’ as I’d walk in the door … It was my culture.”

Now, he says, “You feel like a stranger in your house.” 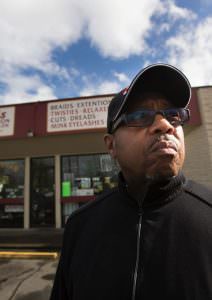 There are no upcoming events.

The national homeownership rate didn’t move much off a near 50-year low in the first quarter, but the rates for African Americans and Hispanics have started to tick upward, according to the U.S. Census Bureau. The homeownership rate for black households, which fell to its lowest level since the Civil Rights era last year, rose […]

There are no upcoming events.